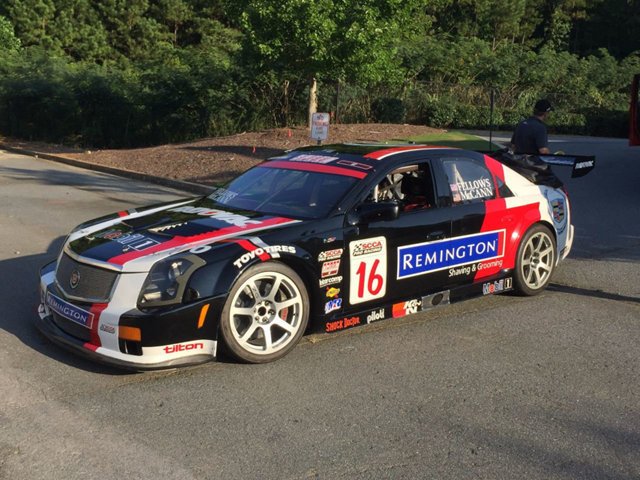 When Cadillac decided to enter the Speed World Challenge, they were committed to do it right. That's why they hired Pratt & Miller to design (along with GM engineers), develop, build, support and race these cars. Both GM and Pratt & Miller had learned a tremendous amount about building winning race cars by the time this program started in 2003 having run the Corvette program since 1999. Cadillac spent $60 million to develop, build and campaign these cars. The engineering and innovation is simply amazing. As you know, Cadillac won the manufacturers and drivers championship in 2005, only their second season racing this car, and won the championship again in 2007. Racers recognize that the World Challenge is some of the best road racing in the world with many manufacturers participating.

This car is Chassis #4 which was the third race car on the team. Chassis #001 was never raced - it was the development and test car. This (Chassis 4) benefitted from all of the learning from the first two cars and had the least track time when it was sold to McCann racing , Also known as Team Remmington-Cadillac for the 2008 season. GM was about to enter bankruptcy at that point so it was decided to sell to a privateer to keep the cars racing. Over its 5 year career it was driven by many great names including Johnny O'Connell, Max Papis, Max Angelelli, John Heinricy, Andy Pilgrim, and most often by Ron Fellows and Jordan Taylor. Never wrecked and always maintained to the highest level by P&M it is truly race ready.

There are enough spares to almost rebuild the car including a complete drivetrain, suspension, brakes, shocks, body parts, exhaust, and on and on. Engine is a refresh by Katech and the trans and rear were rebuilt by P&M so in great shape. Other parts are either new or excellent, reusable condition.

This car can be raced in AER events (newer racecars that don't have a professional series race in series like this, Daytona Prototypes, ex IMSA/ALMS cars). Many vintage racing series also have classes for these cars.

This 2005 Cadillac CTS-VR - PRATT & MILLER PRATT & MILLER FACTORY CADILLAC CTS-VR features a 6.2 LTR 8cyl Gasoline engine. It is equipped with a 6 Speed Manual transmission. The vehicle is Black with a BLACK Leather/Suede interior. It is offered As-Is, not covered by a warranty. - AM/FM, Leather/Suede Interior Surface, THIS CAR COMES WITH A BOS AND IS NOT LEGAL FOR STREET/ROAD USE. - Contact JR Amantea at 203-537-1804 or gtmotorcarsllc@gmail.com for more information. -