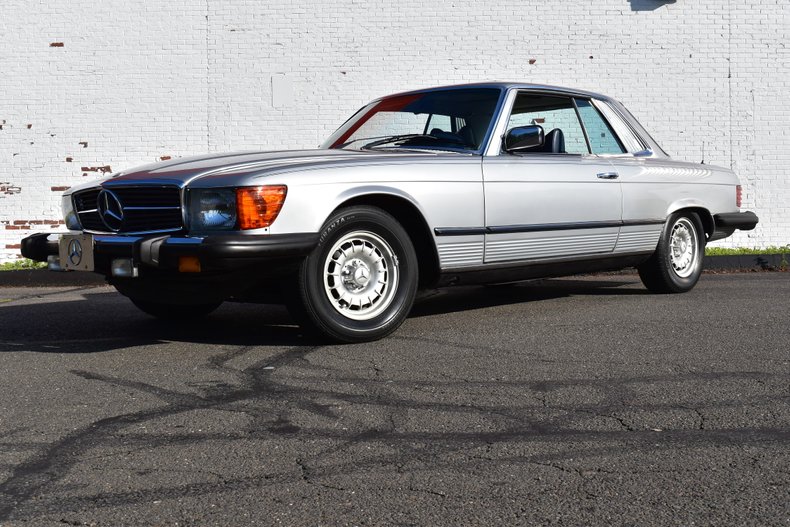 Mercedes-Benz unveiled the all-new and thoroughly modern R107-series in 1971. The 107 continued along the path forged by the R113 that set the foundation of the SL-class as we know it today. The R113 was the car that took the engineering excellence of the original 300SL and combined it with the broader market appeal of the junior 190SL in a package that was sporty civilized and exceptionally well-rounded. The SL was now a sports car for those who preferred to arrive in style yet remain completely unruffled an ethos that remains in the DNA of today's SL roadsters.Introduced in late 1971 the R107 further refined the theme set forth by the R113 albeit on an all-new platform that was larger more rigid and wrapped in finely detailed styling. It was also the first new model to benefit fully from Mercedes' obsession with safety that began in the late 1960s. From its introduction it was designed to carry both six-cylinder and a new line V8 engines. Suspension was fully independent all around backed by four wheel disc brakes and a robust unibody chassis. Alongside the traditional roadster with its optional removable hard top Mercedes-Benz also unveiled a full four seat version with a fixed roof and extended wheelbase.

This new model dubbed “SLC” replaced the ageing W111-based 280SE and marked the first time their flagship four-seat coupe was based not on a sedan platform but the sporting SL platform. The SLC shared the same suspension braking and powertrain components as its open-topped sibling but benefitted from an exceptionally rigid platform with the fixed roof. Combined with the longer wheelbase and the larger 4.5 liter version of the alloy V8 the SLC delivered robust performance and exceptional ride quality. Typical for a Mercedes-Benz SL-class car the SLC was tuned for high-speed touring rather than outright corner-carving ability.

This particular car is mostly original paint, it has been pampered for 45k miles. The Exterior of the car is in very good condition, the Interior is also in very good condition showing very little wear on the driver side seat. The carpets are in excellent condition. Typically these rust out around the wheel wells and behind the rear wheels and also yellow, this car does not have that.

These are great entry level collector cars that you can out 4 people in and cruise. These were cars of the early "80's" that made a statement of "I've made it."