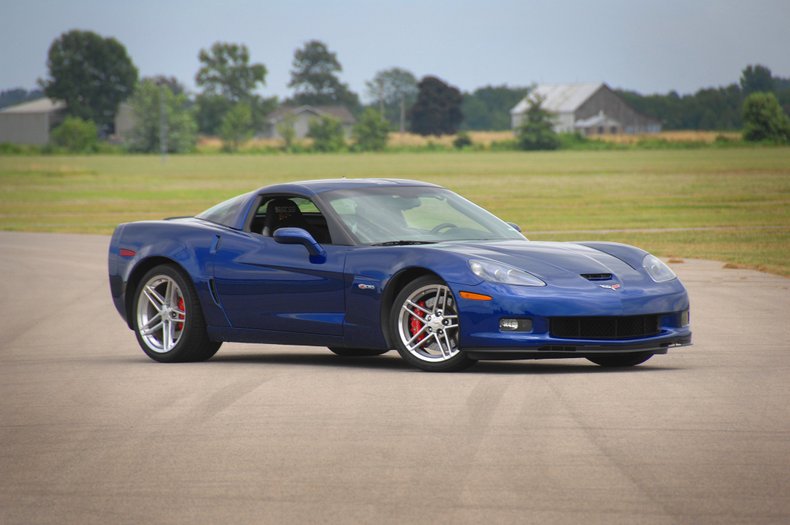 The Corvette Z06 arrived as a 2006 model in the third quarter of 2005. The newest Z06 followed its predecessors from 1963 and 2001-2004 as the most track focused model, offered from Corvette. The Z06 was equipped with the largest-displacement small block ever produced by GM, a new 7.0L engine code-named LS7. The LS7 produced 505 HP and was the most powerful naturally aspirated engine put into a production car from General Motors at the time. In addition to the larger displacement engine, the Corvette Z06 has a dry sump oiling system, and connecting rods made out of titanium alloy. The Z06's body features larger front and rear fenders and an intake inlet scoop on the front bumper. The front fenders are constructed with carbon fiber and the rear fenders contain ducts to aid in cooling the rear brakes.

In March of 2005, it was instrumented and retrofitted with safety equipment at the Milford Proving Grounds in Michigan. In June 2005, it topped 200 MPH on the Autobahn with Tony Rifici behind the wheel. The same month, this Corvette underwent Nurburgring testing and development, recording a lap time of 7:42.99 from a standing start with driver Jan Magnussen. Jan would memorialize this time by signing the center consoled with the time.

During the Nurburgring testing, many photos of the car appeared in automotive magazines, Car and Driver suggested it was the “CORVETTE FROM HELL” (in the best for ways). This car was photographed and appeared “airborne” on the “Ring”. In July 2005, Jan Magnussen gave rides to the press during a long-lead press show. The Z06 underwent more testing at the Virginia International Raceway and Spring Mountain in late 2006, this time with Johnny O'Connell behind the wheel and a focus on thermal and brake cooling development.

After years of testing to develop the Z06, this Z06 was then used by Corvette Chief Engineer Tom Wallace for track events in 2006 – 2008. As the years passed, this EX-Z06 was used again for development of the ZR-1 front fascia and radiator. Development of these components utilized hours of wind-tunnel testing and high speed runs at the Milford Proving Ground straightway to finalize production components. In early 2008, this Z06 had a complete driveline refresh by GM.

This Z06 was formerly part of the GM Heritage collection, based outside of Detroit. The private GM owned collection houses some of the most iconic styling and developmental cars built by GM. “Each of the vehicles in the Collection illustrates a design, technical or sales milestone or accomplishment in the history of General Motors or automotive history.” – GM Heritage website. Upon retirement from service in GM this Z06 joined that fabled collection for a few years. When GM went through their financial troubles during the great recession, they were forced to liquidate a large portion of their collection. Shortly thereafter, the Z06 joined a private collection in the Midwest for over a decade. It has been displayed publicly on numerous occasions and even enjoyed a track day or two. This Z06 is a great option for a track car with Corvette Racing history or in a private collection as an investment!

Included with this experimental Z06 Corvette is over 200+ photos of the build and delivery process. Additional documents from the purchase of this vehicle at the time of previous sale are included.