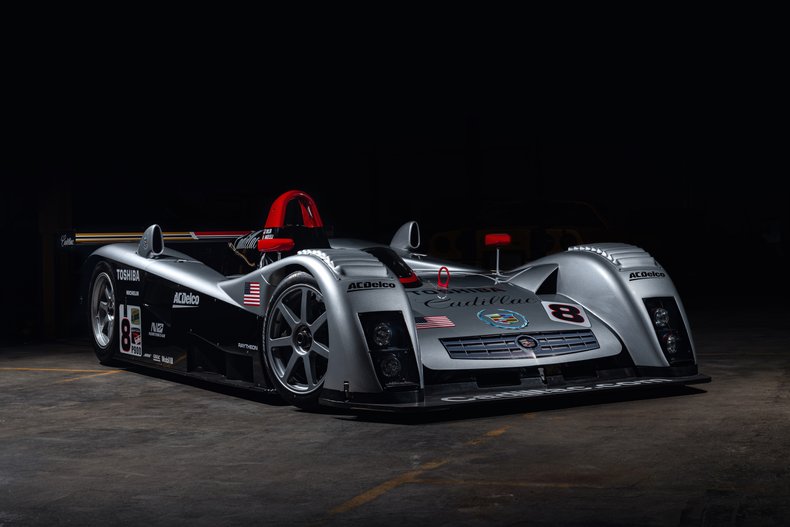 In the early 2000's Cadillac was looking to reinvent itself with edgy styling and they were looking to attract the younger generation over from BMW, Mercedes and Lexus. The V-Series was born. General Motors had just launched the “Corvette Racing Program” in 1999 and it was decided that they would enter the prototype program with the Cadillac. This was Cadillacs first factory efforts since it hired Briggs Cunningham to build its Series 61 and the “LeMonstra”. Cadillac enlisted the help of Riley & Scott to spear head the program. They developed a new car based loosely on the much successful Mk III C chassis. General Motors had much experience and success with its Indy Racing engine program and they used this engine as a twin-turbo version.

A total of seven chassis were built, two went to the U.S. team, three to the French DAMS team, one a show car and one a test car.

After the 2000 season, Cadillac enlisted the help of Mazda's Le Mans winner, Nigel Stroud. Nigel revised the aero of the car. The cars received a shorter and flatter body work, which is what you see the car as today. This particular car finished just off the podium behind the Audi R8's on 3 of 4 occasions in the 2001 season as high as 4th.

This car was run by Riley & Scott, except during the 2001 LeMans 24, it was run by DAMS. It was driven by the likes of Wayne Taylor, Max “The Ax” Angelelli, Butch Litzinger, Christophe Tinseau, Emmanuel Collard and Marc Goossens.

This is a unique opportunity to own a piece of General Motors and Cadillac Racing History. This car was on display at the LeMans Museum in France.

This car was recently gone through with its mechanicals. A fresh paint job paint and factory graphics, new Menard 4.0 engine (exact same engine as the original, less turbos (zero miles), all new wiring, conversion to Motec ECU, new belts. The car has not been run as yet except on the dyno. Ryan Falconer Race Engines dyno'd and mapped the new Motec ECU. The Gearbox is an Xtrac sequential 6 speed. You can add paddle shifters to this gearbox if you preferred.

The original Northstar Twin Turbo Engine comes with the car with all of the piping, lines and fittings. Many other spare parts accompany this car: control arms, up rights, two spare gearbox cases, fuel cell, gears, axles, radiators, wheels, complete nose, all original wiring that was removed.