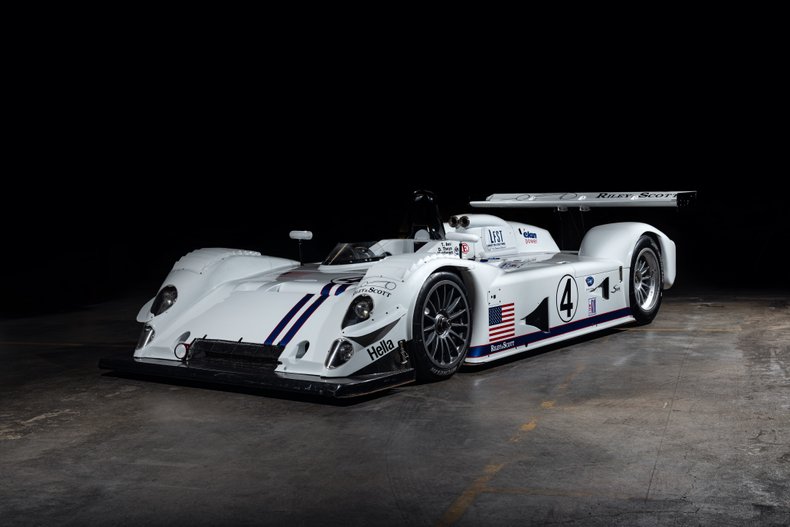 Riley & Scott is synonymous with racing; Bill Riley and Mark Scott began building race cars for the Trans Am series back in 1990 and really came onto the scene in the IMSA GT series in 1995. Their new “Prototype”, the MK III went on to became one of the most successful race cars in endurance racing history earning itself 47 victories and championship titles throughout the USRRC/Rolex Sports/ALMS series.

In 2001 as the LMP class was becoming more competitive with new manufacturer backed teams and with R&S being hired by General Motors for the Cadillac LMP Program, they needed to improve the reliable Mk III C, so the Mk III C was born. They redesigned the car and incorporated some changes from the Cadillac. The chassis was a hybrid of steel and carbon with a full carbon body. At the front, a radiator was fed air from a vent above the front splitter, which then exited over the top of the bodywork just in front of the cockpit. The sidepods were on the whole lower, but of a similarly flat design with exchangeable sections for to improve cooling and aerodynamics when required. The engine bay could accept multiple naturally aspirated engine types (to allow teams much flexibility with different powerplants), any of which could be mated to a new X-Trac 6-speed gearbox, which was a massive mprovement over the previous 5-speed gearbox. This gearbox was further enhanced by the option to fit a Megaline pneumatically actuated gear-change system, which was activated by paddles on the steering wheel, rather than by a traditional gear stick. The most notable visual difference with the “Mk III C” were its more rounded nose plus the cockpit area, as it featured a single rollhoop as seen on the Cadillac LMP, though an optional roll hoop extension was offered as was required by Rolex Sports Car Series regulations. The front of the cockpit was also redesigned, with an aerodynamic windshield being added in front of the driver in place of a fullwidth design.

5 Mk III C's were constructed. 1 of them becoming the FIA crash test car. 3 of the Mk III C's were built for U.S. based ProAm Jim Matthews. Matthews decided to put on a full assault for the major endurance races. Daytona, Sebring, LeMans and Petit LeMans.

For their attack on the 24 Hours of Daytona the team contracted Guy Smith (who later went on
the win Le Mans with Bentley), Scott Sharp (1996 IRL and 2009 ALMS Champion) and Robby
Gordon (IRL, Champ Car, NASCAR and off-road star) to join Matthews. 004 qualified well in 4th
place, and featured strongly throughout the race, looking like a contender for victory until an
issue lost them some time in the closing laps, and they finished a nonetheless highly impressive 2nd overall. For the 12 Hours of Sebring a month later Smith was retained, with Belgian endurance veteran Marc Goosens joining the lineup. The trio qualified in the top ten and again impressively finished 3rd overall, in front of factory entries from Audi, Cadillac and Panoz.

These two consecutive performances gave the R&S team great confidence ahead of the 24 Hours of LeMans. Guy Smith had been called up for Bentley duties and so reigning 24 Hours of Daytona winner, Didier Theys, was recruited to run alongside Matthews and Goosens. 004 however qualified a disappointing 16th, which didn't reflect the car's potential at all. It is interesting to note however that every car inside the top ten ran on Michelin tires, with just the factory Bentleys on Dunlops, while Ascari ran on Goodyear like the Mk III C. It is believed that Matthews Racing had initially planned to run on Michelin rubber all season, but having decided against certain races, the tire supply was cancelled; it is rumored that when testing on Michelin rubber the Mk III C had lapped half a second faster than an Audi R8 with Michelin Tires. At Le Mans after 13 hours the engine failed which resulted in a DNF. To close out its career at Petit LeMans at Road Atlanta in 2002, the car was retired after contact with a tire barrier on the front nose.

This car was never raced post its Jim Matthews racing career. It was fully refreshed and is ready for the track or your collection. This is 1 or 2 Mk III C's to race at LeMans and this is the only Mk II C to race Daytona/Sebring/LeMans. This car can be enjoyed at Goodwood, Peter Auto, Endurance Classic, Monterey Historics and would be an automatic invite to any concours event as it has international racing history.