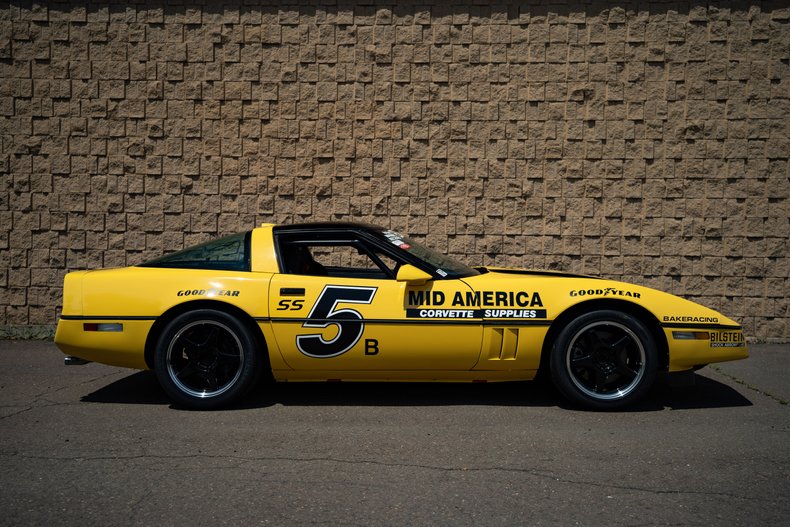 Mid America Motorworks' involvement with professional Corvette racing began in 1987 with the SCCA Escort Endurance Championship. The Championship had about a dozen teams, fielding over 25 cars in the SS class. Sometimes this seven-race endurance series would have up to 20 Corvettes entering each race event. Mid America partnered with Bakeracing in this Corvette and its sister, the #4. Between Corvette #5 and its running mate #4, six of the seven victories were won by Bakeracing and his Yellow Corvettes. This Corvette was raced in what was considered “showroom stock” form with some modifications for safety. Kim Baker, a master strategist, as well as driver and car builder, installed a variety of 350 TPI engines, each purpose-built with the length of each endurance event in mind—5, 12 or 24 hours. This Corvette is one of two built by Kim Baker and Bakeracing for the Escort Series. It ran at the Sears Point, Portland, Brainerd, Mosport, Road Atlanta, Mid-Ohio and Sebring tracks in 1987. After helping the Mid America-Bakeracing Team capture the National Title in 1987 bringing home six of seven Escort Endurance Series victories, the car was sold and disappeared for nine years. Then in 1996, while attending a Mid America Motorworks Corvette Touring Challenge race, Mike Yager rediscovered and purchased the #5 from a series driver. He then sent it to Kim Baker for a comprehensive restoration to 1987 racing specifications. You now see it as it drove to victory in the 24 Hour Race at Mosport Track in Canada in 1987. The number 5 Corvette was driven by Mitch Wright and Shawn Hendricks. Corvette wins at the 1985, 1986 and 1987 Escort Endurance Championships led to the creation of The Corvette Challenge, a race where the Corvette was classed in a series by itself. It also enjoyed a successful SCCA Club Racing history after the Escort Series.

This car is perfect for any track event or historic event. It is very easy to run and a reliable easy car to drive. Own a piece of Corvette race history.

Currently on Display at the National Corvette Museum in Bowling Green Kentucky.