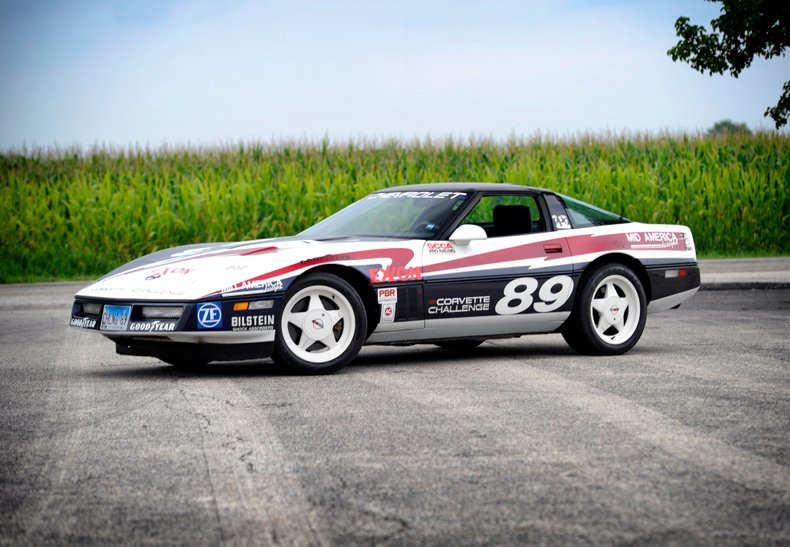 - The only Corvette Challenge “marketing car”
- Original documentation and paperwork from General Motors, Chevrolet and the series
- Past participation in Corvette Challenge reunion at Corvettes at Carlisle
- Sold with a title
- Featured in the National Corvette Museum and MY Garage Corvette Museum
- Features GM “CPC Engineering” decal on windshield
- Window Sticker signed by Zora Duntov and Dave McLellan

Corvette won every single SCCA race in 1986 and 1987. Something had to be done to make racing “fair”. In 1988, the first season of the Corvette Challenge debuted. In 1989, the second year of the series, 29 Corvettes were manufactured by Chevrolet.

This particular 1989 Corvette Challenge was the poster car for the series. With a purse of over $1,000,000 and major sponsors: Mid America Motorworks, Goodyear and Mobil 1 – the series attracted some major talent. In order to promote the series, Chevrolet used the #89 for marketing purposes. This car received an extremely bright and attractive paint design, by GM Design Staff. The graphic design was created by Corvette Designer, Kirk Benion. The car would be used at all 1989 races and was featured in several marketing pieces created by the series and Chevrolet.

The #89 Challenge Corvette is unique in the fact that from the exterior, it appears as the rest, with sponsor decals and Challenge specific Dymag wheels. However, the car featured no roll cage or the additional safety equipment fashioned on the other cars. With just 16,5xx miles – this Corvette Challenge car has resided with the same owner since 1989. Ready for Radwood, the racetrack or shows!