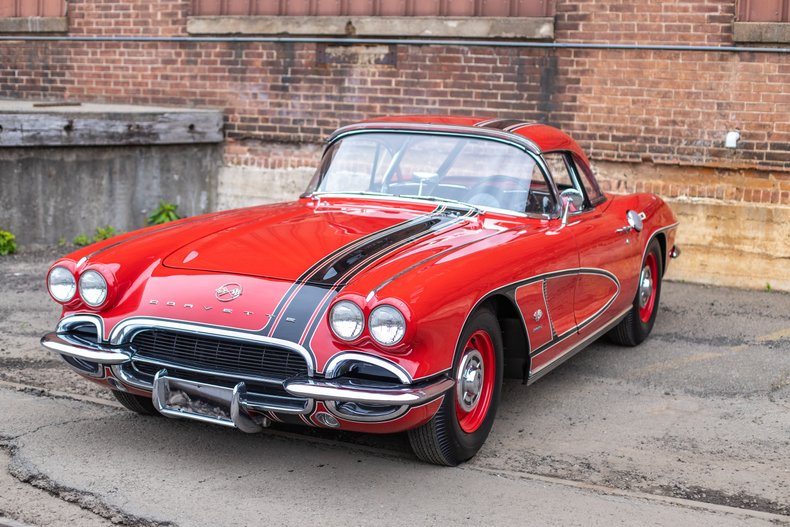 This 1962 Corvette Racer has a ton of history.When young Californian Tom Mazzola purchased this 1962 Chevrolet Corvette from a local dealership in 1966, he had no idea of its true nature as one of the hottest Corvettes to leave the assembly line in 1962. However, it didn't take long for the 29-year-old SCCA racer to discover that it was, in the parlance of the day, a “Sebring” car, one endowed at the factory with a cohesive assemblage of race-proven components developed by Corvette Engineer Zora Arkus-Duntov during years of testing in competition. Offered since 1957 under various names and configurations, the optional Heavy Duty Brakes and Special Steering package included special shock absorbers, finned brake drums, internal cooling fans fed by air scoops and deflectors on the front brakes and air scoops on the rear, metallic linings, and a quick-steering adaptor.

One of only 246 equipped with the “Big Brake” option in 1962, Mazzola's Corvette features the Rochester fuel-injected version of the new 327 CI small-block V-8 with the requisite 4-speed manual transmission and Positraction rear end. With the combination of fuel injection, 11.25:1 compression and the solid-lifter “Duntov” cam, the 327's extra displacement raised peak output from 1961's 315 HP at 6,000 RPM to an exhilarating 360 HP. The car also features the extremely rare 24-gallon fuel tank, necessitating the auxiliary hardtop in place of the standard soft top because of the tank's intrusion into the storage area.

When fellow racer Gene Layne purchased the Corvette from Mazzola in 1976, he commenced a careful restoration, emulating the original paint scheme of Roman Red with black scallops in quality Ditzler paint after stripping the car down to the original fiberglass. Presented exactly as Mazzola raced it, this prominent SoCal Big Brake Fuelie Tanker was featured on the cover of “Vette Magazine.”

This special 62' Corvette has been a prominent marque at many NCRS events and was part of the 50th anniversary celebration in Nashville, TN.

This is truly a part of Corvette history and SoCal race history. This car could be invited to many concours events and to many vintage race events.