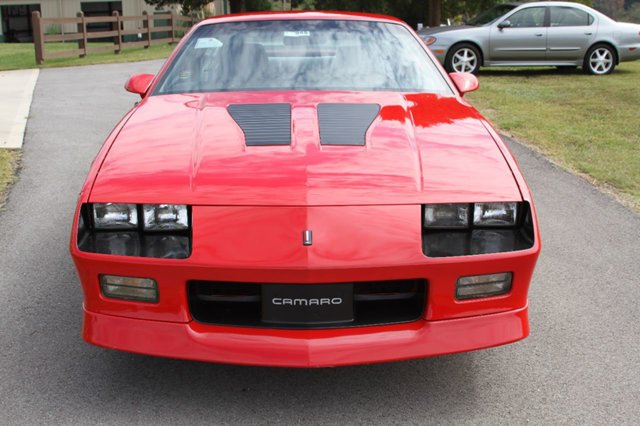 This one is special as it is one of only 34 of the 305 5speed cars produced in 1990 which was also the LAST year of the IROC Camaro.  This one also had the stripe delete option as it was clearly originally intended to be  on the track.

With only 1,375 miles and in as delivered condition it is rare and very collectible for the Camaro enthusiast. Fully documented with all the paperwork and titles that certify the mileage.

SOME HISTORY ON THE 1LE CAMARO:
A new SCCA racing class had emerged in the late 1980s called Showroom Stock. Starting in Canada, it was the first time with the Canadian Players Challenge where it would grow to include SCCA and IMSA events in the USA. This was just the class where the top-of-the-line production Camaro could excel. As sophisticated, refined, and powerful as the IROC-Z was as a street car, however, Showroom Stock racing had a way of bringing out the weaknesses in a car. The sanctioning bodies permitted changes to the shock absorbers or struts, wheels, and tires; no other changes to the suspension could be made. While racing the camaro's they discovered that the brakes needed to be changed. They simply were not designed to go from street to track and just would not suffice.
Due to the many complaints from Camaro racers, Phil Minch, a General Motors brake engineer, set out to come out with a solution. One very important part of this solution was the use of the massive 12-inch front disc brakes off the Chevrolet Caprice as it used the same front bearing package as the Camaro. Unfortunately these calipers, Minch suspected, would end up not being up to the task. So After some research, Minch checked out and was considering the two-piston aluminum caliper manufactured in Australia by PBR. The Corvette used this caliper as they were specifically made for them. To use them for the Camaro, it required modification to bolt to the Camaro spindle. Minch worked with Camaro platform chief engineer Chuck Hughes and F-body power-train manager Ray Canale to get the car modified. The rear disc brakes that came with the original four-wheel disc brake option were felt to be adequate, since most of the braking force is borne by the front brakes. Bill Mitchell of Special Vehicle Developments was contracted to do track testing of the car. The stock front-to-rear proportioning valve was nonadjustable and did not work well with the new brake setup. It was replaced by a new proportioning valve with satisfactory results.
After all this, the the vastly improved braking revealed yet another weakness. During hard braking, the engine would suffer starvation of fuel when the fuel level fell below a quarter tank. To fix this, baffles had to be added to the gas tank as well as a new fuel pickup and sock.

These had to manufactured to ensure the tank-mounted fuel pump was constantly fed under all racing conditions.
General Motors, Chevrolet addressed other complaints from racers. Virtually the manual five-speed transmission was virtually used in all the Camaro's raced. The overdrive fifth gear was great for mileage but too tall for the small-block V8's torque and horsepower band. With Mustangs, which were lighter and differently geared, camaro racers were battling just to keep up with them. Another added change to the Camaro was to change the fifth gear ratio in those Camaro's ordered with this 1LE racing component package. For weight reduction purposed and revolving mass of the racing Camaro, an aluminum driveshaft would be part of the package. An engine oil cooler was also added as insurance.
An enthusiastic and competent engineering student, Mark Stielow, assisted Hughes and Canale in procuring the pieces for the 1LE option and getting them into the production loop so they could be assembled on the Van Nuys, California, assembly line. Chevrolet's John Heinracy, who was a frequent and very successful racer of Camaro's as well as Corvettes, was actively involved in the entire process. This included all the way from the racetrack to the Camaro assembly line to ensure the finished product performed back on the track. To qualify for Showroom Stock, all these new items had to be available on the production car so the car could, in fact, go Showroom Stock racing as equipped.

What the 1LE package consisted of: (Detail)

This special package was known in Chevrolet Engineering as 1LE, but it was not an offered as an official ordered RPO feature. The 1LE Special Performance Components Package was triggered when the G92 Performance Axle option was ordered, G80 Limited-slip 3.42 rear and the C60 air conditioning option was not ordered. If only the G92 option was checked, the buyer had to select from the B2L 350ci V8 with automatic or the LB9 305ci V8 with 5-speed manual. (The standard V8 in the IROC-Z was the 170-horsepower LOS 305ci V8-not enough power for the SCCA Showroom Stock competition.) The G92 package included the engine oil cooler, four-wheel disc brakes, dual converter exhausts, P245/50ZR16 Goodyear Eagle tires, a 145mph speedometer, and 5,500rpm tachometer. Air conditioning could be ordered in these cars. If the camaro was ordered without air conditioning, the 1LE option code was then automatically triggerd. This included an aluminum driveshaft, heavier duty front disc brakes and calipers, fuel tank baffle, specific front and rear shock absorbers, and unique durometer jounce bumpers. The 1LE option added nearly $700 to the car's price tag.
In mid 1988, the 1LE Special Performance Components Package became available but was virtually unknown to most Camaro racer-types. The result, only 4 1LE equipped IROC-Zs were built at the Van Nuys plant that year. (However anecdotal evidence suggests 4 RPO 1LE's were exported to Canada which seems to suggest the possibility of actual 8 were produced. However this is not official.) However, by 1989 the word of the 1LE started to circulate. Eager buyers were now with checkbooks in-hand for the 1LE racing performance package. For 1989, the dual-catalytic exhaust system was added to the package; a total of 111 IROC-Zs were ordered with this package. And the buyers were not disappointed. Chevrolet writes, "In 1989, Chevy's F-body swept the Sports Car Club of America (SCCA) and International Motor Sports Association (IMSA) Showroom Stock series. Camaro's won every race in the SCCA Escort Endurance Championship, and captured the 'Car of the Year award in the IMSA's Firestone Firehawk series."
What The 1LE consisted of: (Categorized & Year By Year)