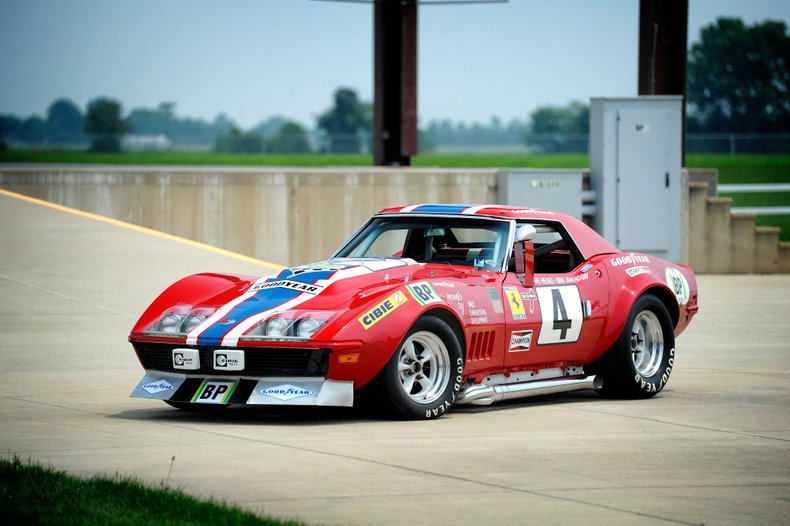 • 560 bhp, 427 cu. in. OHV L88 V-8 engine,
• 4-speed M22 “Rock-Crusher”
• J56 disc brakes with twin-pin calipers.
• Built by Toye English's RED team as the successor to the legendary “Rebel”
• Completed the 1972 24 Hours of Le Mans, finished in NART livery as it was part of the Famous NART Ferrari TEAM!
• Finished 1st in class and 3rd overall at the 1973 24 Hours of Daytona
• Beautifully and authentically restored by Kevin Mackay of Corvette Repair
• Displayed in the Bloomington Gold Special Collection
• Exhaustive file of documentation and history, including original correspondence
• Certified by the Sportscar Vintage Racing Association

Having dominated the southern Florida racing scene for three years with his factory-built, lightweight, L88-powered 1968 Corvette, Orland “Or” Costanzo sold the car to his team manager, Toye English, midway through the 1971 season. English continued campaigning the car under his new, independent operation, Race Engineering & Development (RED), with a striking “Stars & Bars” livery, a jab at competitor John Greenwood's “Stars & Stripes” Corvettes, giving it the lasting nickname of “The Rebel.”

Aided by back-door assistance from Zora Arkus-Duntov and Chevrolet Engineering, The Rebel continued racking up the wins in 1972. In addition to its performance at Daytona, The Rebel had a remarkable turn at the 12 Hours of Sebring, qualifying an unimpressive 13th but almost immediately taking the lead and never relinquishing it: Heinz led the GT class for the entire 12 hours and finished 1st in the GT class and 4th overall.

For all its racing victories, though, there was one thing The Rebel could not do: compete at Le Mans. It did not qualify; rules stated that any GT-class entrants had to use a majority of factory parts or original-style equipment. As a result, RED's application was denied, only to have team sponsor Goodyear finagle their way into Luigi Chinetti's NART reserve slot, on the condition that RED's Corvette be finished in Ferrari livery. English's team accepted, and the race was on to build a new Corvette specifically to run at Le Mans.

The team reviewed the Le Mans rulebook carefully, discovering that GT entries had to have a complete interior. English bought a wrecked 1968 small block Corvette convertible from an insurance auction in Miami for a paltry $600. Any damaged parts were discarded, including the frame, which was replaced with a new frame purchased for $159 from Ferman Chevrolet, the workplace of The Rebel's original owner, Or Costanzo. FIA-spec fender flares were installed on the repaired, seam-welded body before a host of fresh GM driveline components were installed, all of which came through the back door at the factory. A freshly blueprinted L88 provided the power. According to team PR man Walt Thurn, the engine was detuned with a milder cam, lower-compression pistons, and a reduced 5,800-rpm redline, to emphasize durability over power for the GT class.

A red, white, and blue NART paint scheme was applied, complete with Ferrari's Prancing Horse logo on the door. It took eight weeks and RED was ready for Le Mans with their new #4 car (#57 was already claimed).

Once in France, courtesy of a lift from sponsor TWA, the team found out that Ferrari had withdrawn its prototypes from the race, and the Corvette's reserve slot had just become a guaranteed entry.
LE MANS, 1973

After passing the tech inspection, the Corvette took to the circuit for practice. Its drivers, Dave Heinz and Bob Johnson, quickly learned the nuances of the famed loop, but near the end of practice, Johnson skidded on a plastic banner that had blown onto the track and crashed at 100 mph. He was unhurt, but the Corvette sustained some heavy damage to its front end. Ever resourceful, the team stripped off the damaged fiberglass, pop-riveted aluminum sheet metal in place, disassembled a shipping crate for wooden support struts, and covered the whole assembly with duct tape. When questioned by incredulous race officials about the improvised front end's ability to sustain the stresses of an endurance race, one team member responded by jumping up and down on the new nose. It held and RED was back in the race.

There was another challenge to be dealt with too: sponsor TWA had heard of the accident and withdrew its sponsorship just before the race. The plucky privateer crew managed to secure a BP sponsorship at the last minute, slapping BP decals over the TWA globes already on the car's flanks.

The next day, as the race began, RED found that the gas tank wasn't holding the correct amount of fuel. It was later discovered that the fuel line had kinked during the crash, and the team had to refuel considerably more often than planned before finally managing to diagnose and repair the issue. Nonetheless, they kept at it. A set of Goodyear radial slicks with channels cut in by hand helped provide traction even in the face of torrential downpours. By 5:00 a.m., the #4 Corvette was in 8th place overall, despite starting in the lowly 53rd position. Sadly, engine trouble and an electrical fire stamped out the team's hope of victory, but the car finished 15th overall and 7th in class and was the only Corvette to finish.

Back home in the States, the car was stripped of its Ferrari livery and given a revised version of the Stars & Bars paint of its big brother, #57 The Rebel. They campaigned together for part of the 1972 season, with the #4 car eventually being renumbered as #57. The original #57 The Rebel, rather confusingly, raced as either #54 or #56. That first “Rebel” was retired after being campaigned at Mid-Ohio in July 1972, while this car became RED's primary racer. In 1973, it took 1st in class and 3rd overall at the 24 Hours of Daytona, the best finish for a Corvette at the famed raceway until 2001.

The car was then re-bodied as a wide-body in 1974 and campaigned at IMSA events, before being sold to the same upstate New York racer who had purchased the original Rebel, Alex Davidson.

Years later, the #4 Le Mans car was rediscovered and purchased by noted vintage racing enthusiast Jack Boxstrom, from whom it was acquired by its present owner, a renowned Corvette aficionado. He sent it to Kevin Mackay and the experts at Corvette Repair in Valley Stream, New York, who performed an immaculate restoration to its Le Mans configuration. During the complete disassembly, the Corvette Repair team found a number of unusual parts on the race car, including a brake master cylinder from a Chevy Nova and a steering wheel from a Chevy Vega GT. A number of items had even been borrowed from Caterpillar equipment or marine applications, proving yet again how resourceful the RED team was when creating a low-budget yet world-class race car. The Corvette Repair crew meticulously documented all of these unique parts, returning the finished Corvette to its quirky but accurate Le Mans configuration, down to applying custom-made decals, including the overlapping TWA and BP logos.

Since the restoration's completion, the Le Mans Corvette has been featured in an array of prestigious events, including the 2015 Amelia Island Concours d'Elegance, where it took part in the L88 Race Car special class. Further, it is certified by the Sportscar Vintage Racing Association and has certification number 6-270. It's easy to see why it turns so many heads: only the five original Grand Touring Corvettes are more coveted, and the unusual Ferrari livery and earthshaking L88 engine attract even those who are not Corvette experts.

For significance and scrappiness, it's hard to beat this amazing slice of American road racing history. Saved from an ignominious end in a scrapyard and being made the successor to one of the most important racing Corvettes of the 1970s, the RED/NART Le Mans Corvette is truly a worthy successor to a towering legacy—and proof of what American ingenuity can accomplish.