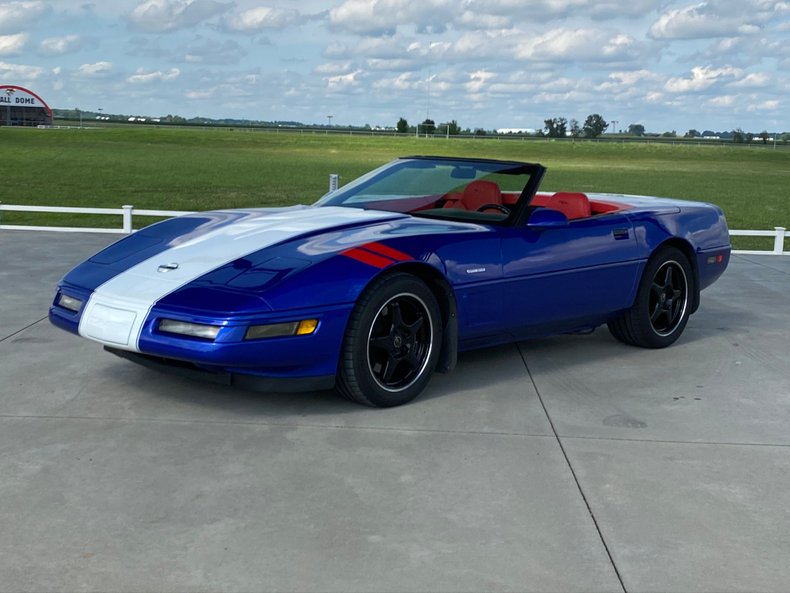 In 1996, to celebrate the last year of the C4 Corvette, Chevrolet launched the coveted Grand Sport Corvette. The Grand Sport featured the one year only motor, the LT4. The LT4 produced 330 horsepower, 30 more than the stock LT1 In addition; it featured a higher compression ratio at 10.8:1 vs. 10.4:1 and had a higher rev limit at 6300 RPM. To keep the car planted, the Corvette team equipped the convertibles with P255 45/ZR17's in the front and P285 40ZR17's in the rear – all with the special black ZR1 style wheels. Throw in the fact that all LT4's had a third pedal, it was truly an enthusiast geared car!

Only 1,000 Grand Sports were made and all featured the beautiful Admiral Blue with a white a stripe and red hash marks! Of the 1,000 made, only 190 were convertibles. To make things even more unique, only 53 of those 190 convertibles were equipped with the optional Torch Red Interior, making this Grand-Sport very rare.

Offered here is VIN #006, which makes it a very early production Corvette! In addition to sporting an early VIN, #006 was used a Pilot Line Corvette by GM staff. As noted on the build sheet, #006 was shipped directly to the GM Proving Grounds. As a Pilot Line Corvette, #006 was kept by Chevrolet as a showpiece and used for additional testing throughout the final year of the C4! When GM disposed of #006, it had a report 8,000 miles.

VIN #006, complete with 46,427 miles is arguably one of the best C4 Grand Sports in existence. The fact that it is 1 of 53 in this configuration and the Pilot Line history, makes this a true collector grade C4 Corvette. Considered as “Young Timer” Collectible.