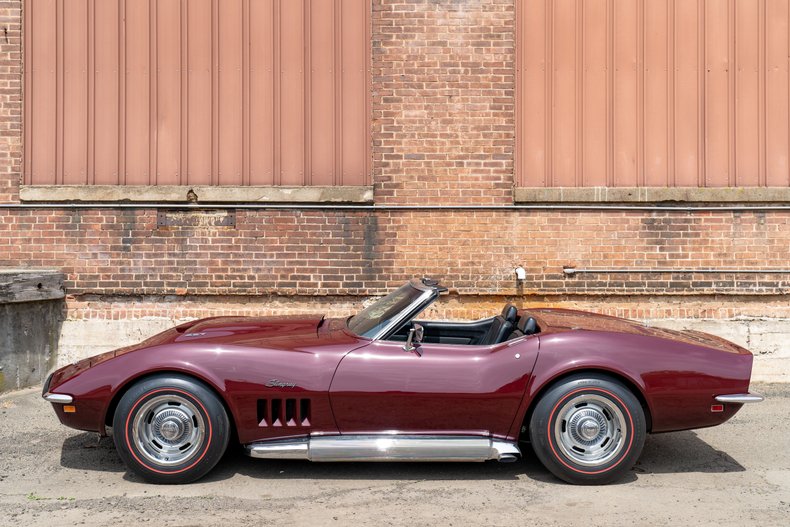 Restored Factory Documented L88 Convertible 1 of 3 in this Color

L88s were produced in very limited numbers, and this sensational example is one of just 116 made for 1969, the final production year. The car was originally equipped with the desirable four -speed manual gearbox and finished in Burgundy over a black interior. The consignor, a longtime NCRS judge with multiple L88s, believes it is one of just three delivered in this stunning color. Rarer still, this car retains its original tank sticker which was discovered by a previous owner, carefully removed, and validated by the NCRS.
Delivered new through the renowned Konner Chevrolet dealership of Caldwell, New Jersey, by 1978, the car was in the care of L88 enthusiast Pat Shwery, who had searched for more than two years for a great example. In light of its significance, Mr. Shwery put leading L88 restorer and Bloomington Gold Judge Tim Thorpe in charge of its restoration. The Corvette was then owned by several L88 enthusiasts during the 1990s, most notably well-known L88 collector Steve Hendrickson. It was also a part of the Steinman Brothers Collection before the current owner acquired it in 2007. In 2008, the Corvette was treated to a body-off chassis and interior. Since then, the car has also been expertly repainted, bringing it up to optimal condition.

Equiped with side pipes and a removable hardtop, this L88 has won some of the most prestigious Corvette awards, including the coveted triple diamond/triple crown: the NCRS Top Flight, Bloomington Gold, and the Chevy/Vettefest Gold Spinner awards. Invited to three Bloomington Gold L88 special collections, this is a highly scrutinized and well-known example. Rare and brutally powerful, this award-winning Corvette is an important example of one of America's most iconic automotive achievements.
This is a rare opportunity to own an “Investment Grade” AAA Corvette.

Interior: #1-, All original except for the carpets. The Door Panels, Dash Board and Seats are all original. The seats have the original foam in them and could be replaced.

Engine Compartment: #1-. Carburetor was just rebuilt. The car was just dry ice cleaned, chrome on the valve covers are like new. Paint on the engine is as originally applied.

Chassis: #1-. In very good condition, control arms, trailing arms are powder coated, Frame is proper shade of factory black. The natural items are coated with a preservative. The cad plated items are in good condition and show little signs of wear. The rear spring and bushings were restored and bushing replaced last year.