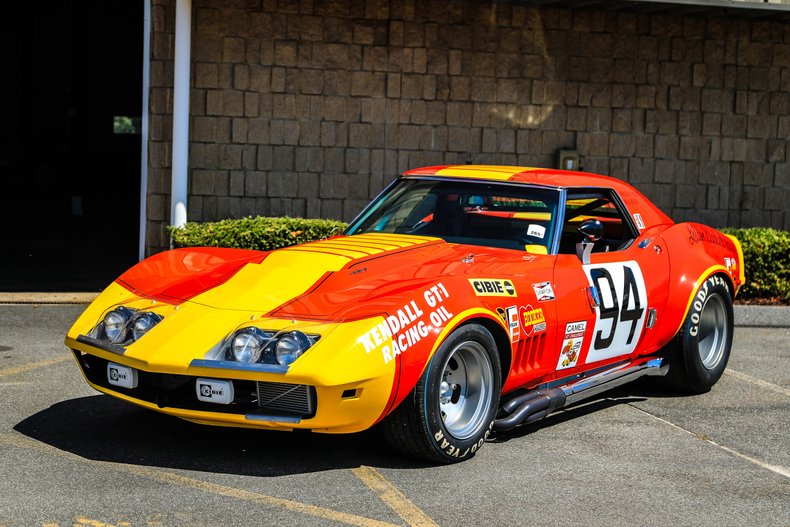 The Leldon Blackwell owned and built #94 1968 Corvette race car was born out of Leldon's
significant experience and success as builder of the Dave Heinz #57 “Rebel” Corvette race car.
Subsequent to the “Rebel” car winning the GT class at Sebring and Daytona, and capturing the
first IMSA Championship, Leldon went on to build his own car. #94's record includes 16 th at
Sebring, 1973 (qualified 8th ), and 2nd at Daytona's Presidential 250, 1972.

Leldon's team built everything themselves, from the chassis to the engine. The team's success
prompted Zora Duntov/Chevrolet Engineering to utilize Leldon's car to test experimental
transmissions and rear-ends. The experimental transmissions were especially beneficial as they
were far easier to shift over the span of a long distance race, greatly reducing driver effort and
fatigue. Leldon was also proud of the fact he achieved a top qualifying speed of 222mph during
one of its Daytona outings, receiving an award.

Mo Carter was a noted Canadian racing driver who competed in the Trans-Am and
IMSA series, and as a result of his successes was inducted into the Canadian Motorsport
Hall of Fame.

Gene Felton has won more major races and more consecutive championships while
driving American cars on U.S. road circuits than any other driver, with 46 career IMSA
victories, 73 class pole positions, setting 63 track records at Daytona, Sebring, Road
Atlanta, amongst many others, and as a result, winning 55 percent of his races.
#94 has been selected to appear at the Amelia Island Concours (twice), Meadowbrook Concours,
Greenwich Concours, Chips Choice and NCRS Gallery at Corvettes at Carlisle, and the Newport
Concours.

#94 is the result of a complete restoration by Corvette Repair, Inc., Valley Stream, NY, that
return the car to its original 1973 Sebring configuration. The car is documented with a
continuous history of ownership, from Leldon Blackwell to the present time.

This car is eligible for HSR/SVRA/Masters Endurance Series.