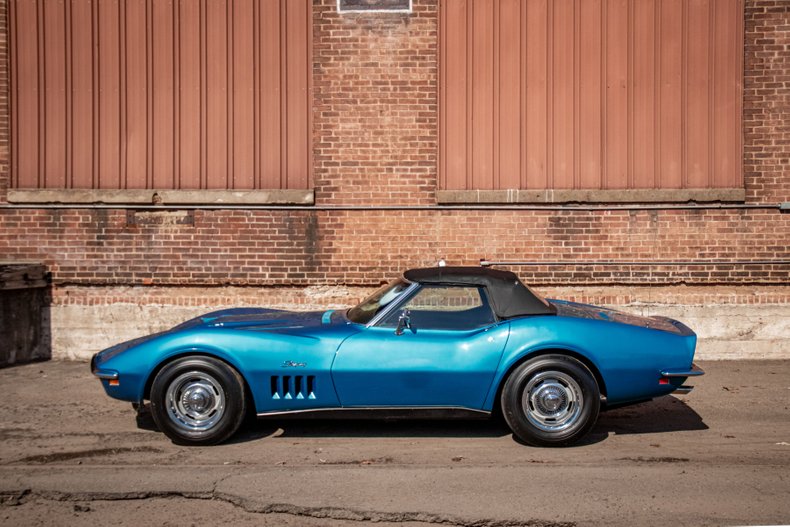 Sold in December '69 from Harry Green Chevrolet in Clarksburg West Va. This late production factory L71 Roadster was purchased new by Paul Thompson a local Clarksburg business owner & racer that loved Corvettes. Cared for by Thompson & then later sold to the Legendary pioneer of Corvette Collecting Mr. Jerome Shinkay. Shinkay a well respected Entrepreneur was known for Purchasing & collecting Low Mile Unrestored Rare Corvettes. After 40 yrs of the Corvette hobby Jerome was inducted into the Bloomington Hall of fame in 2012. This 17k Mile 435 is all original & unrestored. A magnificent car that has been owned by the same Collector for the last 20 plus years & during that ownership He amassed some unbelievable awards that don't come easy including the coveted “Benchmark” award in 2012. A true survivor in every sense of the word this is a completely original car with its factory original paint, interior, convertible top, vinyl covered hardtop & most important its Born with original engine & drivetrain. Documented with the Original Protectoplate & warranty book, Original Tank Sticker, owners manual & packet, original keys & more. Exhaust system was replaced using genuine GM dated mufflers from 1985 when they were still available & the Goodyear Blackwall tires are correct reproductions.

All Judging sheets & Original awards are included in this sale

This ultra rare time capsule is near impossible to duplicate & is now ready for a new caretaker. Remember many people can restore a car to receive these well respected awards but just a few 50 year old original untouched cars how they left the factory have been able to do so.