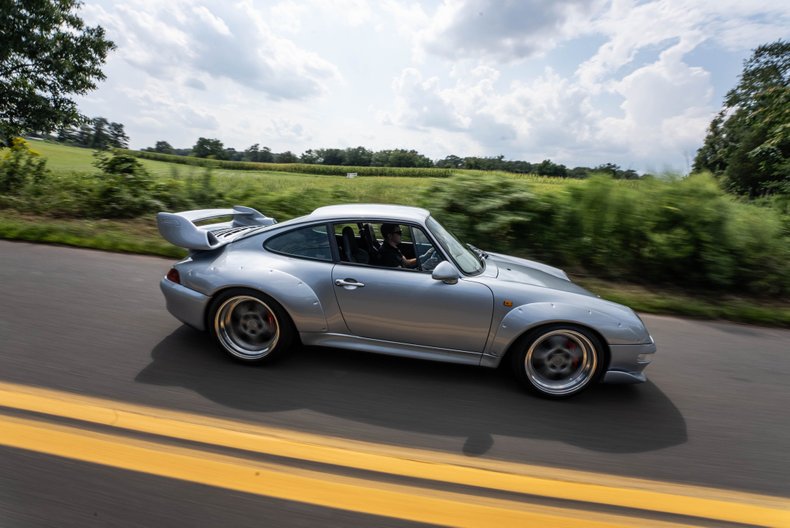 One look at the 993 GT2 and you know this car means business. This is the first time in Porsche's history that they used the, “GT2,” moniker. Porsche decided to enter the world of GT racing; and to do this, they had to build a certain amount of road going cars for, “homoligation.” They built 172-194 GT2's in total, all of our research shows less than 200 and both of those numbers have been referenced.

The GT2 was an all-out track car for the street. It is considered by many to be the, “ultimate,” Porsche. Porsche engineers removed the all wheel drive system and kept it, rear wheel drive, upgraded the suspension(pretty much from the 993 GT2 Cup Race Car that dominated the international sports car series), cut the fenders and bolted on some massive fender flares to wrap the wide tires and lightweight, “Speedline,” wheels, a massive rear wing with massive air intakes. They even used a thinner windshield to save weight. On the engine, they increased the twin KKK turbos and added more boost. The result, 1,295kg (2,855lbs) and produced 430hp and 585nm of torque (432lb-ft). The was 450 lbs lighter than the 993 Turbo and it was the fastest road going air cooled Porsche to hit the pavement.

This particular example has traveled only 3,300 km (2,050mi) and has had just 2 owners. This car. This car has all of its original paint, the floor mats are still in the original plastic, the pedals still have the rubber nibs on them. It just underwent a cryogenic cleaning. This is one of the nicest examples on the planet. It has its books, tools, original spare. This car looks like it did back in 1996 at Stuttgart.

With low production numbers of less than 200, and now importable into the U.S. as they are over 25 years old, this car is in the early stages of collectability.