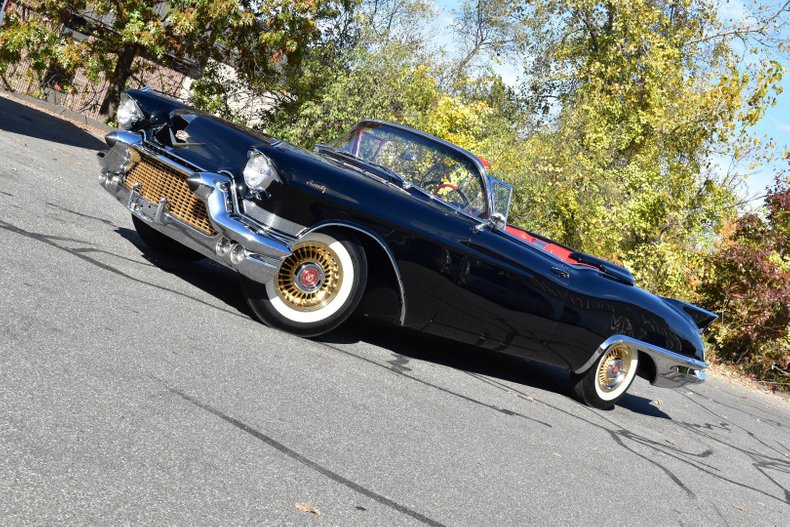 From their radically curved wraparound windshields to their unusual "X-member" frames, the 1957 Cadillacs were virtually all new. Engineered to maintain Cadillac's "Standard of the World" prominence, the '57s evidenced a fresh and pleasing vigor in their styling. Cadillac customers could choose from two convertible styles-the traditional Series 62 offering, or the ultra-prestigious Eldorado Biarritz.

Cadillac had debuted the first Eldorado, a special sports convertible that introduced the wrap-around windshield, in 1953. Price at an astounding $7,750, that ultra-plush first edition attracted 532 buyers. Sales rose in 1954, as the Eldorado became for that year essentially a specially trimmed Series 62 Convertible. The 1955 Eldorado was more distinctive, with its exclusive sharp-edged fins. In 1956, the Eldorado became available in both "Biarritz" convertible and "Seville" two-door hardtop models.

Stylists working under the direction of GM design chief Harley Earl made the 1957 Eldorados more special than any preceding editions. The softly rounded rear sections of the Eldorado bodies were obviously inspired by GM Motorama show cars. Blade-like fins jutted forth from the tapering rear deck. A split rear bumper and memorable tail lamp treatment lent further distinction. Special 15-inch chrome-finish Sabre-Spoke wheels were standard on the Eldorados. The Biarritz was supplied with a fiberglass reinforced plastic top boot, finished in the same color as the car body.

Eldorado standard equipment for 1957 included almost every conceivable power-assist and luxury feature available at the time. These included a power six-way front seat, left-hand remote outside mirror, a radio, and power steering, brakes and windows. Air conditioning, E-Z Eye tinted glass and an automatic headlamp dimmer were among the few extra-cost options. The Biarritz convertible listed for $7,286-about $2,000 more than the ticket for a Series 62 convertible.

Cadillac produced a total of 1,800 Eldorado Biarritz Model 6267SX convertibles for 1957. (The 'S' in the model code indicated special styling, while the 'X' was GM code for a body style equipped with power windows.)

Not just for show, the Caddy was mechanically refinished as well. The motor was torn down, and new rods, pistons, lifters, connecting rods, seals, rings, bearings and camshaft were fitted. NOS parts were used wherever possible. The transmission and brake system were similarly overhauled. Even the convertible top mechanisms were restored with a new black vinyl top installed.

Complete but in need of a total restoration, a thorough operation was begun in 2009 by restorer Bill Frye in Nevada to bring the car back to like-new condition with little regard for cost. Entirely disassembled, the body, frame and chassis were sanded, sealed, restored to factory specifications and finished in rich black paint. The interior trim was removed, measured, and meticulously reproduced in new red leather by Arturo's Aircraft Upholstery in Kingman, Arizona. All of the chrome and aluminum trim was sanded, refinished and rechromed as well, with bills for the chrome trim alone amounting to over $25,000.