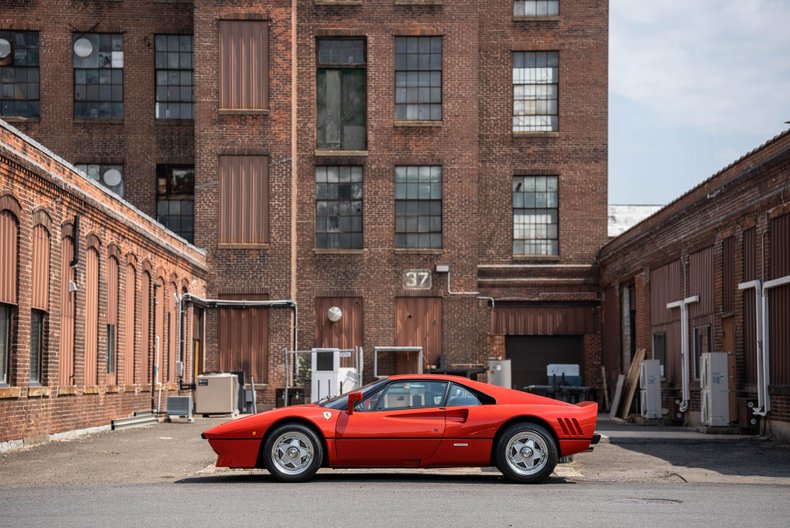 The 288 was born out of a vision to go FIA “Group B” racing. The 308 GTB was the basis for the 288. With Ferrari being under the Fiat umbrella during this time, Enzo was disappointed with the products that were coming out of Ferrari. Unfortunately the “Group B,” class was canceled in 1987 before the car was completed, but Enzo pressed on anyway. He enlisted the help of some of the engineers from Lanica to help turn the 308 GTB into a Group B racer with no limits. In order to have cars, “homologated,” to go racing, the manufacturer had to produce a certain amount of cars. They produced 272 288 GTO's in total which is the fewest amount of all of the super cars. If it wasn't for the 288 GTO, there wouldn't be an F40 and there wouldn't be an F50.
The 288 GTO was priced at $85,000 new. The 2 8 8 GTO is one of the most collectible modern super cars and it bears the, “GTO,” badge.

The 288 GTO was born, “GTO” standing for “Grand Turismo Omologato,” which equates to, “Homoligation.” This was the second time in Ferrari's history that the, “GTO” moniker was used. The first being the 250 GTO back in 1962.

The 2 8 8 was designed to push the engineering envelope. While doing that Enzo had a vision to make the car as light as possible. The 288 was the first Ferrari to incorporate the use of Carbon Kevlar composite body panels. This material was used on the hood and roof. The doors were aluminum and fiberglass was used on the front fascia and rear fascia. They managed to get the weight down to 1,160kg (2,555lbs), about 550lbs lighter than the 308 GTB.

The 288 was shortened up, while the wheelbase was lengthened by 8”. The GTO had functional aero on the car with brake cooling scoops in the front and rear, vents to feed the IHI Turbo's and a dovetail spoiler for downforce which is also reminiscent to the 250 GTO rear as well as the 3 vertical vents on the rear quarter panel.

The engine was a de-bored version of the 308 Tipo F160-V8, it was debored to 2,855cc's (2.9ltr) and renamed the F114B. The engine had dual overhead camshafts, 4 valves per cylinder, mated with lightweight connecting rods, nickisel coated liners and heads (to reduce friction). Ferrari looked to Japanese turbo manufacturer IHI to engineer the Turbos for this car as they did most of the rally cars. All of this equated to 400hp, 0-60mph in 5 seconds, 0-125mph in 15 seconds and a top speed of 190mph; effectively making this the fastest road going car.

The engineers had to turn the engine from being, “horizontally,” mounted to, “longitudinally,” mounted in order to make additional room for the Turbo's.

The suspension was planted at each corner with, “Koni” coil overs. While the brakes were Brembo disc brakes.

The 288 was a road going race car and one of the most special Ferraris produced. The 288 cemented Ferrari's platform on the world stage as the cars at that time were far from optimal. As much of a race car for the street as they are, they are very amazing and docile to drive on the street. The 2-8-8 is very easy to drive normally, but depress the throttle hard and you feel the twin turbo's spool and plant you back in the Daytona Seats as you row through the 5-speed gated gear lever.

This particular example is one of the finest 2 8 8 examples on the planet. It has traveled only 3,800km (2,360mi). It has been fully serviced, the engine has been rebuilt and chassis restored by the “Werks,” Ferrari shop, Michelotto in Italy. This car is Classiche Certified by Ferrari and bears its original and matching numbers driveline, a letter from Ferrari also documents the cars authenticity from Ferrari. This car is equipped with the rare Factory Air Conditioning and Power Windows. This car was delivered new to the U.S. and owned by a large known Ferrari Collector; he had it in his collection until 2009. While in the U.S. he never registered the car as he owned Ferrari dealerships and wasn't required to register it. Under his ownership it traveled only 1,532 km. He sold the car in 2009 and the second owner owned until 2019. The car was sold to the 3rd owner in 2019, and acquired by GT Motor Cars in 2021.

One look at this car and you would think you were back in Maranello in 1985.