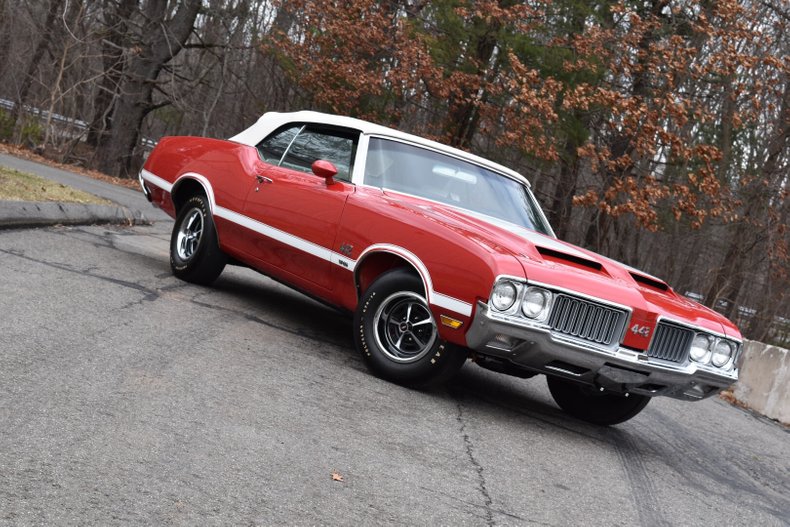 This 442 is 1 of 96 ever built and is equipped with the 1970-only W27 aluminum rear axle. When the previous owner purchased the vehicle, it was a time capsule. It had not been driven since 1978 and it had original paint, original spark plug wires, carburetor, hoses, belts and so on. It is an original 77,000 mile car. The Ohio title to the second owner states 74,000 miles. The original owner resides in Buckeye, Arizona, and is still very enthusiastic about the car and fondly describes the events which led to how he came to purchase the car. The W30 was purchased new at Columbia Oldsmobile in Cincinnati, Ohio. After wrecking his 427 4-speed Corvette and spending a few weeks in the hospital, the owner decided his Hot Rod days were over and was set on purchasing a Delta 98 convertible. He went down to Columbia Oldsmobile and as they were riding the elevator told the salesman, "My Hot Rod days are over." As the doors to the elevator opened, there sat a Matador Red W30 convertible with a white top. The next words out of his mouth were, "I'll take it."

Documentation:
The car is documented with the original title number verifying ownership to the owner,
Pieces of the Build Sheets recovered before restoration took place, some pictures of the car from 1970 and pictures of the car when the previous owner purchased it.
Opportunity to own one of GM's last real Muscle Cars!