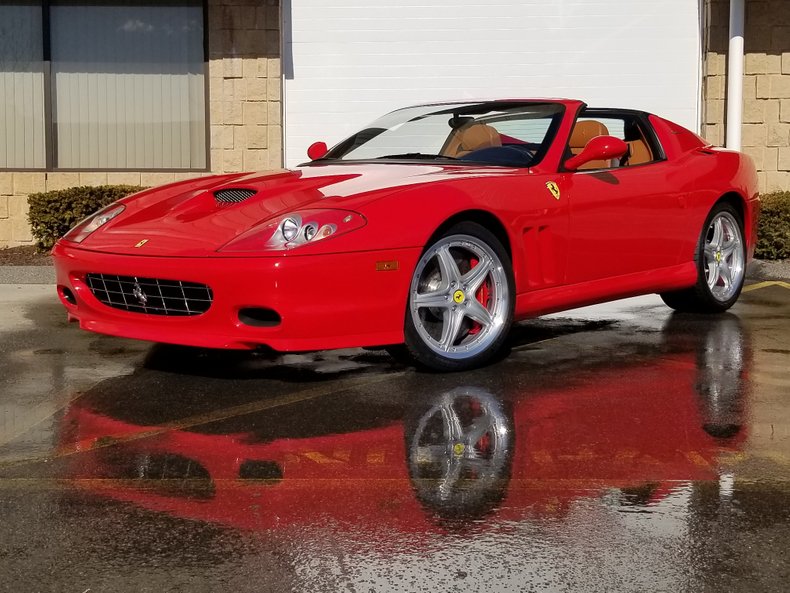 540 bhp, 5,748 cc 65-degree V-12 engine, six-speed electro-hydraulic F-1 transmission, independent front and rear suspension with coil springs, telescopic shock absorbers with adaptive damping and anti-roll bars, and front and rear carbon ceramic disc brakes. Wheelbase: 98.4 in. This is one of the most collectible Ferrari's of the modern era. You will not find a better SuperAmerica with great Pedigree! MULTIPLE TIME PLATINUM AWARD WINNER!

Looking to make the Superamerica more usable than the 550 Barchetta, Ferrari chose to go a very interesting route with the car's convertible top, inventing what was called the Revochromico rotating hardtop. Constructed of a carbon-fiber frame integrated with electrochomatic glass, this would be the first roof of its kind to be fitted to a production car. When closed, the opacity of the glass in the roof could be adjusted via a dial in the cabin, turning the glass from fully transparent like a conventional sunroof to only allowing in 1% of the available light. At the press of a button, the roof easily rotates back to rest flush with the boot lid, leaving the rear window to function as a wind deflector. One of the major benefits of this design was that the roof rests on the rear deck, so as to not obstruct luggage capacity. As a result, the boot is more than spacious enough for a weekend getaway for two. With the exception of the roof, the Superamerica remained mechanically identical to its closed sibling.

This particular 575 Superamerica was purchased new by none other than Roger Penske. Finished in traditional Ferrari Rosso Corsa (DS 322) over a Cuoio leather interior, it was acquired by its third owner two years ago. Furthermore, the car was outfitted with Daytona-style seats, the highly desirable GTC package, Scuderia shields, and hi-fi stereo with six-disc CD changer, and satellite navigation, and its tachometer was finished in Giallo, amongst other options. Since then, it has received Ferrari Classiche certification, confirming that it is presented today exactly as it was delivered new to Mr. Penske. Its most recent service was completed by Algar Ferrari of Philadelphia in October of 2014. At that time, a standard annual service was carried out, where the engine oil and filter were changed, along with a brake fluid flush. Since then, the car has traveled just 14 miles, and at the time of cataloging, the odometer was showing just 4,479 miles from new. In addition, the car is accompanied by its original car cover, set of owner's manuals, tool kit, and a file of service invoices.

Purchased new by Roger Penske and having enjoyed just four owners and 4,504  miles from new, this is surely one of the finest 575 Superamericas available today. Boasting Ferrari Classiche certification, it would be a wonderful addition to any collection of Ferraris, as it represents one of the most innovative and compelling automobiles ever built in Maranello.