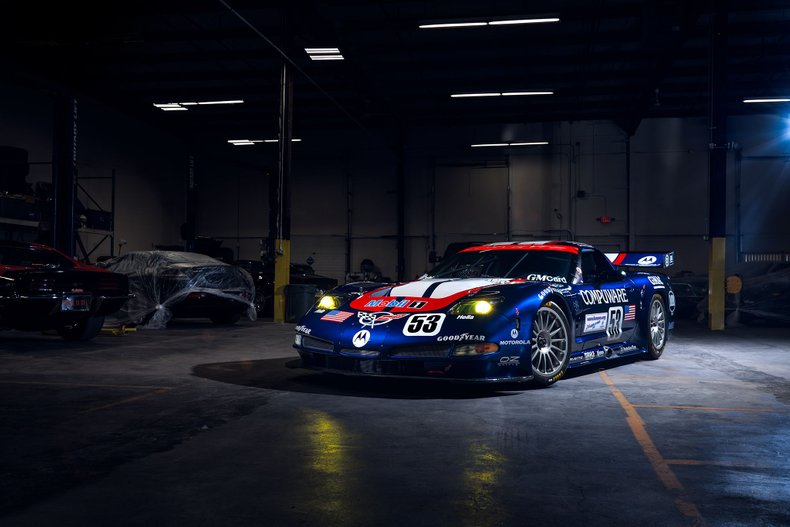 After decades of arm's-length involvement racing Corvettes, Chevrolet created its own race team in 1998 to showcase the new C5. Built by Pratt & Miller Engineering after a season of program development in 1999, the C5-R was from the start a purpose-built race car utilizing the most advanced technologies and materials available.

The C5-R initially used a 366 CI V-8 engine based on the production car's LS1. This was replaced later in the 1999 season with a 427 CI engine built by Katech Engine Development. Developing a reliable 600+ horsepower, the Katech 427 became the standard engine in the C5-R.

Pratt & Miller built 11 C5-R Corvettes between 1998 and 2004, ten of which were used by Corvette Racing and one built exclusively for privateer use. The C5-R presented here is chassis number 9. Co-driven by Ron Fellows, Johnny O'Connell and Franck Freon and wearing number 53, it finished 3rd in GTS and 12th overall at the 24 Hours of Le Mans in June, 2003, sharing the podium with its sister car driven by Kelly Collins, Andy Pilgrim, and Oliver Gavin.

A member of Corvette Racing's 2003 GT1 Manufacturer's Championship-winning team, Corvette C5-R #9 has been completely restored by Pratt & Miller to its original specifications and finished in the distinctive 50th Anniversary livery it wore at Le Mans in 2003. It is brand new throughout; fully race-prepared including the original jacking and fire-control systems and outfitted with a new Katech-built 427 rated at 600 horsepower, an exceptionally rare and historically significant car from a fascinating chapter in Corvette's glorious racing history.