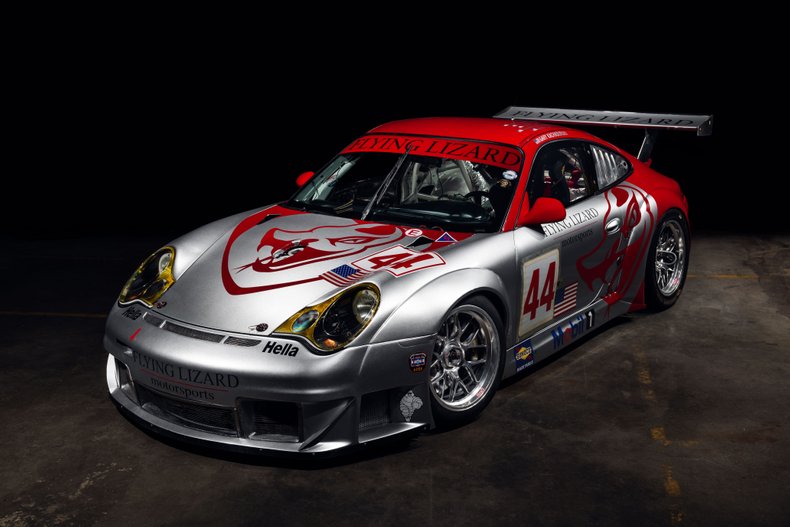 • 1 of 37 Factory 996 RSR's
• 2x LeMans 24 Hours entrant & finisher
• 2nd in Class at 24 Hours of LeMans
• Retains its 100% complete original body and chassis
• Includes tons of spares including LeMans Bodywork, Engine and many more
• Raced by one of the most iconic teams in Modern Porsche History “Flying Lizard”
• Competed in American LeMans Series in U.S.
• 2 Owner Car. Flying Lizard and then a private collector in the U.S.
• Fully Refreshed motor in car with 1 track day on it at Porcsche Rennsport

The 996 RSR was one of the most bullet proof GT Racecars in modern history. This is 1 of 37 Factory 996 RSR's. Flying Lizard is one of the most decorated factory supported Porsche Race Teams in the U.S. This car raced at LeMans in 2005, a full season of ALMS in 2006 as well as its second LeMans 24.

The Flying Lizard team based in California is a privateer racing team that has competed in various racing series and won championships within each. Formed in 2004, the Flying Lizard team has primarily campaigned Porsches. Additionally, from 2007 until 2012 the Lizards were selected by Porsche Motorsport North America to be their development partner for the 997 GT3 RSR with which they were victorious several times in the American LeMans Series. Their distinctive and unusual graphics are probably one of the most recognizable on the American and International racing circuits. The reflective Lizard graphic made the cars a stand-out in the night at endurance races such as Daytona, Sebring and LeMans. Combining fastidious preparation and talented, competent drivers the Flying Lizards were a force with which to be reckoned in the ALMS!

This car has great race pedigree, it has never been crashed or wrecked. It retains its original chassis and body, including the last 24 hour of LeMans bodywork. This car comes complete with tons of spares from suspension, brakes, spare engine, gearbox, bodywork, wheels, tires and windscreens.

It's first time out it finished 3rd in Class at LeMans and 4th in Class at its 2nd 24 Hour of LeMans.

After its racing career with Flying Lizard, it was restored by them back to its 24 hours of LeMans livery and sold to a private collector where it has remained until now. It has seen one track event post restoration.

This is a rare opportunity to own one of the most iconic Porsche Race Cars from this century.