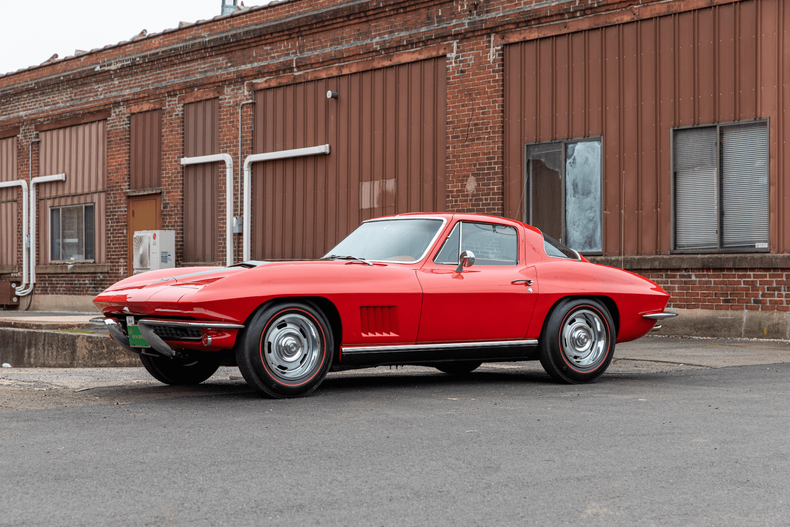 America's love affair with the Corvette began more than half a century ago and is as popular as ever.. Corvette's second generation—also referred to as “Mid Years” — spanned 1963 to 1967, with the final year long regarded as its best. The Mid-Years represented an entirely new platform and an advancement of “America's True Sports Car,” Thanks to all-new independent suspension, disc brakes and many iterations of the small block and big block V8's. Automobile Magazine said in an October 2004 issue titled, “The 100 Coolest Cars.” The Mid-Year Corvette was ranked #1, Automobile said, “Like James Dean, JFK and Jimmy Clark, midyear Corvettes left the scene at the peak of their game.”

This 1967 Corvette is an investment grade, unrestored survivor. In its 54 years, this C2 Corvette has driven a mere 28,000 miles. It has earned an NCRS Top Flight at both the national and chapter levels as well as the coveted Bloomington Gold Benchmark Award, designating Gold Certificate and Survivor Gold status.

This particular 67' Big Block is documented with a copy of the original sales invoice from Rost Chevrolet in Independence, MO. A NCRS Shipping Data Report also validates Rost as the original delivering dealer and is accompanied by an original window sticker, selling dealer envelope which held the sales invoice, original warranty book “Protect-O-Plate,” original books, radio guide and owner's bag, as well as the original tank sticker still on the gas tank. It is extremely rare for all of the original documentation to remain with a car for more than five decades. This 67' was optioned with J50 Power Brakes, M21 Close Ration 4-speed, K66 “Transistorized Ignition,” N40 Power Steering, G81 Positraction Rear and L71 435hp.

All NCRS and Bloomington Gold Judging Sheets and certificates will accompany the car. The engine, trim and VIN tag were validated through the judging process and also confirmed by Corvette numbers expert Al Grenning (CCAS), who has been studying engine pads and tags for more than 30 years and once was head of engines and tags for both Bloomington Gold and NCRS.
This car bears its original paint, remaining completely unrestored as a true time capsule example of a Mid-Year Corvette. It has been included in prestigious Corvette collections owned by Ray Norvell, Larry Fox and John Justo.

Cars are only “original” once, and many from this generation are restored or project cars. This 67' Survivor has passed the most stringent examination in the intensely competitive Corvette judging world. A Corvette earning “Bloomington Gold Benchmark” status has been examined for originality and condition. To earn “Bloomington Gold Survivor Gold” credentials requires every part on the car has to be at least 75 percent original and untouched. The car must also complete a 15-mile road test, passing all operations flawlessly.

The 427's iconic Rally Red exterior is paired with red interior, showcasing improvements from the previous model year. The dash features an original tag boasting “Satisfactory FM reception up to 25 airline miles.”
This is a very rare opportunity to own an original 1967 Big Block Corvette example that is a true investment grade vehicle. As the saying goes, “A car can be restored an infinite amount of times but is only original once.”